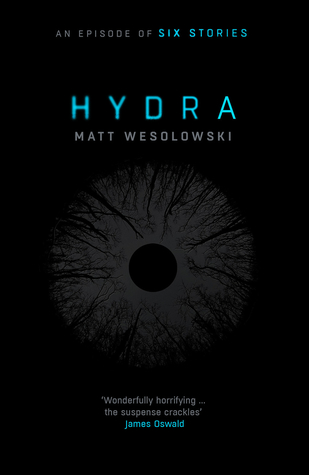 “A family massacre
A deluded murderess
Five witnesses
Six Stories
Which one is true?

One cold November night in 2014, in a small town in the northwest of England, 21-year-old Arla Macleod bludgeoned her mother, stepfather and younger sister to death with a hammer, in an unprovoked attack known as the Macleod Massacre. Now incarcerated at a medium-security mental-health institution, Arla will speak to no one but Scott King, an investigative journalist, whose Six Stories podcasts have become an internet sensation.

King finds himself immersed in an increasingly complex case, interviewing five key witnesses and Arla herself, as he questions whether Arla’s responsibility for the massacre was as diminished as her legal team made out.

As he unpicks the stories, he finds himself thrust into a world of deadly forbidden ‘games’, online trolls, and the mysterious black-eyed kids, whose presence seems to extend far beyond the delusions of a murderess…

Dark, chilling and gripping, Hydra is both a classic murder mystery and an up-to-the-minute, startling thriller that shines light in places you may never, ever want to see again.”

Hydra is a truly stunning book; from the gorgeous cover that screams “Oy, you there! Yes you, don’t think you can ignore me. Come over here and pick me up! Read my blurb, dammit! Now, take me to the till! Go, on. Put me in your bag, go home, and now read me from cover to cover and don’t stop until you’ve finished me!” to the very last page. This is a book that will linger on in your mind long after you’ve put it down (and then picked it up again to stroke it lovingly and whisper sweet nothings into it’s leaves).

Hydra is a prequel of sorts to Matt’s equally brilliant debut “Six Stories” (don’t take my word for it; read it for yourself and bathe in its magnificence). It isn’t a sequel-prequel, you won’t have needed to read either book for it to make sense, but it is set in that same universe, where Scott King presents another case in his Six Stories podcast series. This is a wonderful format; each case is presented as a series of six episodes, with each episode featuring a witness in some way to the events under discussion linked by Scott’s own thoughts and asides. The beauty of this format is that you are rarely sure of who is telling the truth. Matt excels in this area; he is a brilliantly clever and skilled author who gives each character their own unique voice, giving each one enough to link them together, but also enough to doubt their credibility, motivation or reliability throughout. There were times during this book where I was so angry at some of the character’s actions and their justifications for those actions. You can tell that they, for the most part, harbour deep regrets and guilt about what happened, but they also frustrate about their reluctance to open up, admit their compliance and they often appear more worried about their own reputations. This a true testament to the great writing to make you feel this way (if indeed you will feel the same way of course ;))

This book is also shit your pants scary at times. I would suggest that you read this book on the toilet, or maybe whilst wearing a nappy. Yes you’ll look silly, but better to look silly than to have others looking weirdly at you whilst sat in your own feculence. You’ll thank me later 🙂 One of the reasons for this are the B.E.K.s – Black-Eyed Kids. The less said about them here the better – you’ll become acquainted well enough 😉 This whole story is disturbingly creepy in many ways, but Matt’s descriptions, or should that be Arla’s descriptions?, of the B.E.K.s are truly chilling. As for Arla Macleod herself, she is a truly complicated, and even sympathetic, character indeed. Hydra isn’t a Whodunnit, as Six Stories was, but a Whydunnit – the ridiculously clever podcast narrative giving you the evidence to decide what Arla’s motivations for killing her family were and whether you find, or don’t find, any sympathy with her.

This is a thoroughly modern horror story. Psychological/internet manipulation, mental illness, child mental and physical abuse and internet trolling/cyber abuse; all highly pertinent and current issues. It deals with the devastating effects of covering up or ignoring the past, of being made to feel ashamed, unwanted and worthless, of protecting reputation, of being (perceived as) second best.

Matt Wesolowski is a true talent (and another Orenda Books success story), and one who deserves every success that will undoubtedly be coming his way. Hydra (and Six Stories before it), is a complicated, disturbing, richly detailed and emotional book. The next few months and years are going to be a very exciting time for Mr. Wesolowski, and for us, the reader, too. I can’t wait.