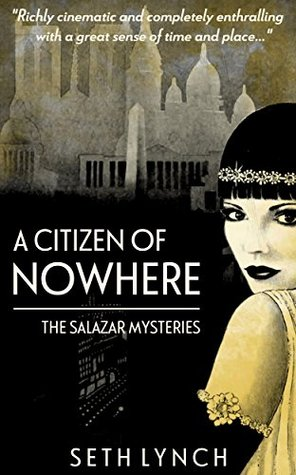 Hello again. Everyone doing okay? How is you personal #Fahrenbruary going? What’s that? Sorry, I couldn’t hear you over the excitement of reposting my review of Seth Lynch’s A Citizen Of Nowhere.

This review originally appeared waaaaaaaay back last year when this little book blog was just known as the Stubbly Book Blogger. True story. Ok, not exactly a true story, the bit about the stubble, but it was one of my very first reviews.

Anyway, enjoy this repost and please come back tomorrow for a repost of my review of the sequel: A Dead American In Paris. After that I will be sharing a brand new Q&A with Seth.

Salazar is an English detective haunted by his experiences of the Great War, who wiles away the days playing chess and taking on as little work as possible. When the alluring Marie Poncelet hires him to find a missing man he quickly realises it’s a case he wishes he’d refused.

Finding a missing man isn’t anything like finding a man who doesn’t want to be found and Gustave Marty has covered his tracks with a smokescreen that will push Salazar beyond the limits of physical endurance and to the edge of insanity.

As he’s drawn deeper into the shadowy underbelly of the City of Light, Salazar’s closed, structured world is blown apart by the arrival of a friend from his pre-war youth, the beautiful Megan Fitzwilliam, whose tenderness and love of life is a stark contrast to the brutal violence that lies within him.

When that violence threatens to engulf them both, Salazar must seek redemption or lose the very thing that has finally made his life worth living.”

Sometimes it pays to take a chance on a book. I took a punt on this title on the recommendation of the publisher Fahrenheit Press as part of their Patreon initiative (if you feel like it, have a shufty here. This is not a sales pitch; I have no affiliation to them at all). The cover had the air of the art deco/Agatha Christie about it and so I thought, eh, why not? And thank goodness to gracious that I did as A Citizen Of Nowhere is a bloody triumph, or should that be, un triomphe sanglant.

ACoN features our hero, Salazar, an Englishman living from drink to drink and drug to drug, playing chess with his landlord and idly whiling away his time in cafés in 1930s Paris. He is a veteran of the Great War and as such suffers from PTSD from his time in the battlefields of Europe, plagued by nightmares of what he saw and the lives he took. He is of Noble stock back in Blighty, having reluctantly taken his war pension and using his trust fund to live on whilst also setting out on a fledgling career as a private detective. It is through this new venture that he is contacted by Marie Poncelet, an elusive and private woman who enlists Salazar to find a man named Gustave Marty for reason she wishes to keep to herself. As Salazar deepens his search for Marty he discovers what a cad he truly is and the levels he will go to to remain undiscovered (painful, almost fatal, levels – not the happy, fluffy levels; the kind with ‘back-off’ cake and stern words to warn him off).

One of my favourite things about ACoN is the way in which Seth writes; His prose is truly beautiful, the words floating off of the page and into your eyes, through to your reading brain like literary butterflies. I loved the 1930s setting, allowing him to use words and phrases that we just don’t hear anymore. It’s also refreshing to read a book where the protagonists can’t just Google their quarry, call for back-up instantly, if at all, or check their whereabouts on a GPS tracker. This is proper old school shit. In fact, this is the school your grandma, maybe even great grandma, went to. Cars, or autos, are still a rare and expensive novelty, attracting derision and suspicion from Salazar who prefers to take the tram, train or to walk – “These machines are like the yellow crosses of the plague, spreading across the city as each area becomes infected with auto-madness. If you want to travel a short distance, cycle or walk; if you need to go further, get the train. Why would you want one of these frightful contraptions?”. He’s so loathe to try them out that at one point he cycles 6 days from Paris to Southern France (ok, he’s also exorcising some personal demons and other stuff, but still, trains, er, hello!).

Salazar himself is a great creation: he’s clever, resourceful and intelligent, when he’s not in his cups, or off his tits on opium or hash, that is. He’s witty too, speaking as he finds in a way that most of us only wish we could without getting bopped on the nose (when asked by a café proprietor: ‘Would you like me to bring an extra chair, sir?‘ he casually replies, ‘Only if I grow an extra arse.’ Classic line that I would love to employ myself one day). He is also one with an eye for the ladies (in appraisal of a secretary he spies whilst waiting to speak to an acquaintance of Marty: ‘She could easily pass for Louise Brooks – a perfect black bob and breasts straining to break free from her blouse. If only they could rent asunder that flimsy silken cage, even momentarily, I would die a happy man. I must look away; I feel like a sailor being lured by the song of the harpies, drawn despite fore-knowledge of the consequences. Am I really so feeble-minded that a beautiful woman, with positively perfect breasts, in a blouse a little too tight, who licks her lips and smiles seductively, can distract me from my work? Of course I am. If all I had were a photograph of her I’d be compelled to take it out and ogle it every ten minutes. What hope have I with the living, breathing version sat but a few feet away?’ Cheeky blighter). He’s prone to outbursts of violence stemming from his PTSD from the war, but over the course of the book he slowly becomes a changed man with help of his friends. Salazar is a skilfully written character. Along the way we also meet Filatre, his chess loving landlord and friend; Megan, his childhood sweetheart; Stefan, the infatuated young man lusting after Marie, and various lethal goons looking to do Salazar harm to protect Marty’s whereabouts. All of these are beautifully drawn and quite believable. Salazar’s PTSD is handled quite delicately, with Seth telling the story in the 1st person and managing to convey his panic attacks over very convincingly. The narrative can be quite disorienting at times, reflecting Salazar’s state of mind very well.

Now, this may come as a bit of a surprise to you all, but I have never been to 1930s Paris. Somehow it has always eluded me. So has modern day Paris, for that matter. However, in ACoN, Seth manages to conjure up the atmosphere of the city extremely well. The sounds, the smells (wait until you visit the sewage worker’s cafe….peee-eww), its people, all spring from the pages. It is a time of hope and renewed optimism after the war years, a time before the world descended back into the despair of conflict again. I guess that this could have been set in London or New York around the same time, but the unfamiliarity of post war Paris, and France itself, lends this story a unique air that wouldn’t work anywhere else.

A Citizen Of Nowhere is a beautifully written period noir detective thriller. Dark, tense, funny and compelling with superb characterisation and simply wonderful prose. I can’t recommend this highly enough. There is another Salazar mystery ‘A Dead American In Paris’ (as well as a related novel ‘The Paris Ripper’, Featuring Chief Inspector Belmont, set in 1931), and I hope that Seth has many more adventures for him up his sleeve for a while to come yet.

You can buy Seth’s books directly from Fahrenheit Press at that handy link down there:

Fahrenheit Press “A Citizen Of Nowhere”