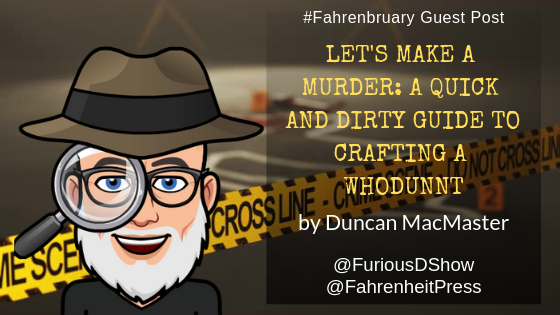 Today is the 22nd Day of #Fahrenbruary and today I bring you a brilliant guest post from none other than Duncan MacMaster. Duncan is the author of the most splendid ‘A Mint Condition Corpse‘, its sequel ‘Video Killed The Radio Star‘ (both featuring his ace nerdy crimefighter Kirby Baxter), and ‘Hack‘, all published by Fahrenheit Press.

When I asked Duncan to write me a guest post for Fahrenbruary he very kindly agreed and boy has he delivered.

Well, beardy blog fans, wonder no more for Duncan will set you straight and guide you through the murky waters of crafting such a tale.

So, without further ado, sit back and discover how it’s done (well, by Duncan at any rate… other methods may be available 😉). 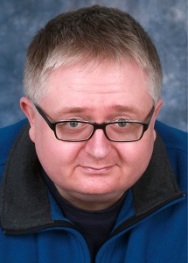 Let’s Make A Murder: A Quick & Dirty Guide To Crafting A Whodunnit

Okay, I’m going to assume that you aren’t familiar with me, or my books, so I’ll do a little explaining. As of this writing I have three mystery thrillers out from Fahrenheit Press entitled A MINT CONDITION CORPSE, its sequel VIDEO KILLED THE RADIO STAR, and the stand-alone thriller HACK. They can be described as classical whodunits with modern twists.

One things I’ve learned from writing whodunits in the classical mould is that it is not easy.

Not easy at all.

It’s a lot of hard work.

However, it’s not impossible. It just takes effort and planning.

This piece is just a quick explanation of my process for writing a whodunit, including some pitfalls to avoid. I hope they help break down what seems impossible into something that’s just a helluva lotta work.

Where Do We Begin?

I start with a premise.

It’s a general idea that can be summed up in a single sentence. Let’s use my own books as examples. (Because I’m not above a little self-promotion)

Now you can’t write a whole novel out of a single sentence. You have a single bone, you will need more bones to make a skeleton, and that skeleton needs some meat on it. So let’s look at the most important next step.

A common misconception is that plot is the key to writing a good whodunit.

Plot comes later, you must always start with character.

What characters does a good whodunit need?

First they must all be interesting, well rounded, human beings, but there are certain key archetypes that are necessary in all whodunits.

Every mystery needs someone to solve it, and that person is the detective. For a classical whodunit they must be very intelligent, observant, sensitive, and very human. They are flawed, they make mistakes, but they will eventually see through the chaos and carnage and figure it all out with their brains and their determination.

These are the people that aid the main detective to varying degrees. In a traditional police/private-eye procedural, there’s the junior partner, or associate, but in the case of the amateur sleuth they are mostly friends, associates, maybe even a love interest. Tradition also calls for an allied police officer who acts as their connection to official law enforcement. The nature of the specific relationships are totally up to you the author. They could be stalwart friends, affectionate lovers, or even hostile rivals who are thrust together by circumstances. Whatever you believe suits the story and the characters best.

You can’t have a murder mystery without a victim, and you can’t have a classical whodunit without what I call the “Lynchpin Victim.” I was going to call this character the “Primary Victim” but realized that it was inaccurate because it implies that they are always the first victim.

That’s the trick, the Lynchpin Victim doesn’t have to be the first character to be murdered in your book. In fact, they don’t even have to be murdered at all. A classic method developed in the Golden Age by innovators like Agatha Christie, was to have all the crimes be committed so the killer’s intended target, their Lynchpin Victim, would be accused, convicted, and hanged for them.

In summary, the Lynchpin is the actual or intended target, around which all the activity of the book revolves. Their death or destruction, whether the killer successfully gets to it or not, is the most important event, and is the driving motivation to the whole story.

There are two types of lynchpin victim.

This brings us to…

Motives define your suspects. To keep your mystery interesting you must have a wide variety, not only of suspects, but motives as well. Mystery legend P.D. James had the best summary of whodunit motives when she had a character’s mentor explain that all motives boil down to the “four Ls”:

Let’s look at them in a little more detail…

Romantic entanglements, heartbreak, or the desire by the killer to protect a loved one from what they perceive as a threat from the Lynchpin Victim.

Infidelity, sexual jealousy, maybe a perverted secret that must be kept at all costs.

Good old fashioned greed. Does the killer seek to enrich themselves through murder? Perhaps they’re trying to prevent losing something valuable by committing murder? Or they think murder will lead to the return of something they believe is rightfully theirs? It’s all up to you.

This is pure and simple hatred.  Perhaps they’re out for revenge for some offence committed by the victim in the past. Maybe it’s an offence that only happened in your killer’s mind? Maybe their hatred is built upon a terrible misunderstanding?

Giving all your suspects the same motive is boring, because if everyone is after the same thing, there isn’t much to tell your suspects apart. If they’re not unique, they’re dull. So it’s best to have multiple suspects with at least one under each motive. If two or more fit in the same general category, then you should use different variations, or even combine motives from different categories. The palette found within the Four Ls are limited only by your imagination.

Now that you have your characters and motives laid out, let’s talk:

Methods of murder are very important when you’re writing a classical whodunit. When I’m planning these things out, I always find it helpful to think about magic.

No, I am not saying that you should have a wizard do it, that’s a whole different genre. What I am asking you to is to think about stage magicians, and what they do on that stage.

They present you an action that looks like they’re doing a completely different action through the beautiful art of misdirection. They also do it with a lot of drama and style.

That’s what a good whodunit writer has to do. Killers that want to be caught don’t make very good mysteries, so you need a killer who is clever enough to find a way to not only murder their victim, but to provide themselves with an alibi, and to cast suspicion on others.

This will require the wannabe whodunit writer to do some research on forensics. Learn about physical evidence, time of death, weapons, and how to manipulate them. It’s very important, because mystery fans are already crime buffs, and many of them will know more about forensic science than you. You don’t have to have a doctorate in criminology, but please learn enough so you don’t embarrass yourself.

Why did I include the words “all of them” when discussing clues?

Because if you don’t give your readers the same evidence you give your detective, you are violating one of the cardinal rules of mystery writing. Seriously, it is, look up the Detection Club which was founded by mystery writers in 1930, they were most adamant about this rule with their members, under the wider banner of “Fair Play.” It’s also solid advice. Denying the readers all the evidence, and then having your Detective pull the missing piece out of their metaphorical backside at the end, will not show how clever you are, it will annoy and anger the reader.

It is like constructing a magic trick, you create your illusion, but in a way that allows your detective to turn the stage around to show the reader what was happening behind all the smoke and mirrors.

Placement of clues is really important. You can’t put them all in one chapter, you need to seed them throughout at least the first three quarters of the book, nestled in among the red herrings.

What Are Red Herrings?

Now some of you are reading this, furrowing your brows, and thinking: “Why is this yahoo talking about fish?”

A “red herring” is an element of the story that leads the reader and the detective to a wrong conclusion. In whodunit stories it can be anything from a tiny fake clue planted by the killer, to a major crime, or conspiracy that, while illegal, and possibly even fatal for someone, has nothing to do with the death of the lynchpin victim.

As with the clues, the red herrings have to be distributed carefully and evenly. They also must ring true to the nature and motivations of the characters involved, both the suspects and the detective. Don’t treat the red herrings casually, because they’re a great excuse to amp up suspense, or even compose a nice thrilling action set-piece for your detective.

How does a writer make sure everything, both clues and distractions, are laid out in a way that’s fair, entertaining, and challenging?

An outline is a blueprint for your story, a sort of master plan. Some writers feel they have to outline everything down to the last detail. I’m not against that method, but I do fear that it might rob the spontaneity and energy out of your project.

My preferred method is to outline the characters, the motives, as well as the major plot points, like where certain evidence or false leads are found, how they’re found, and where they take the detective. I generally leave the rest wide open. This creates opportunities for invention, or for letting the characters inform the plot, without the irrational feeling that you’re betraying some idealized vision of your outline.

Once your outline is ready you can get down to…

Now that you have everything prepared, you now have only the hardest job left: Writing it all down. There are literally reams of books about writing available. I think the best summary of all that I’ve learned can be summed up in some rules laid out not by a novelist, but by musical theatre legend, and co-writer (with Anthony Perkins) of the unfairly underrated whodunit movie The Last Of Sheila: Stephen Sondheim.

This is what works for me when I’m writing a whodunit mystery, and I think it could help you too.

Massive thanks to Duncan for taking the time to write this guest post for #Fahrenbruary.

You can buy Duncan’s books direct from Fahrenheit Press at the links below: